Rush Hour on the Bluebird Highway

Here’s a tip:  If you want to see hundreds of stunningly beautiful mountain and Western bluebirds, Umtanum Ridge Road, at nearly the geographic dead center of Washington is the place to be in early spring.  Thanks to the work of dozens of dedicated volunteers who have built and deployed special nest boxes for bluebirds one can drive along this old pioneer road and be fairly certain to see both of these little blue jewels.

First a brief explanation from the Kittitas Audubon web page:

History of Bluebird Nestboxes in Kittitas County.
Around 1988, a group of Kittitas County enthusiasts began hanging literally hundreds of boxes from fence posts and trees, in places where bluebirds were known (or hoped) to frequent. Many of the early boxes were tacked together assembly-line style by Paul Sollie, a health food store owner in Ellensburg. Paul’s boxes are still in use today, patched and repaired, and identified by their grooved plywood roofs. Some are in place on the Watt trail and Hayward Hill, for example. Other generations of boxes were added in succeeding years as well by various other local builders, at places like Colockum road, Swauk Meadows, and old Vantage highway.

Susan and I drove the full length of the road today and took a little scramble down the muddy trail to Umtanum Falls.  Bluebirds were everywhere!  We couldn’t swing a dead cat in the air without knocking down a few… (Easy cat-lovers, just a figure of speech).

Each box has a number

The views are expansive once you get up on the top of the ridge.

In my next career as a bluebird real estate agent I’ll be able to move this little beauty in a heartbeat.  There was a stream running by, shade in the summer, fall colors, and tons of curb appeal.

We hiked the 3 miles down to a small waterfall.  Susan was not thrilled with the ice and mud on the trail, and even less enthusiastic about the water crossing.  But, as always, she followed faithfully on without complaint.  What a trooper!

A Mountain of Ants

Umtanum Falls was our turn around point.  There was a pretty sketchy scramble (in the ice) to get down to the base of the falls so I was satisfied with a few photos from the top.

It was nice to see a solid flow of ice on the north facing rock.  A couple of years ago Travis and I camped a few nights at the base of the falls and I almost froze my $#@%& off.  Some things just don’t change. 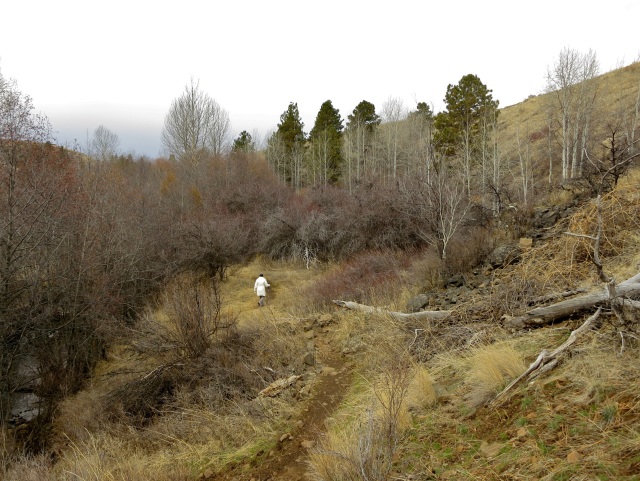 Soon we were headed back to continue our drive along the bluebird (super) highway.  Admittedly my Canon S100 camera was a little out of its league for shooting wildlife images of these skittish little birds, but I did manage to get one of them to sit still for a second.

So let me share a couple of bluebird portraits from my iBird Pro App.

Well, that’s it for today.  Let me close with a final thank you to everybody associated with the efforts to create and maintain the Bluebird Highway.  Kat