“Point No Point”?  What a curious name.  How did such a “non-place” come to exist?  Who came up with the idea of naming something – nothing?

What better way to explore, I thought, than to jump on my bicycle and ride up there to have a look.  First a quick bit of history.

“Point No Point” is an outcropping of land on the northeast point of the Kitsap Peninsula in Washington State.  It was the location of the signing of the Point No Point Treaty.  The point was named by Charles Wilkes during his exploration of Puget Sound in 1841.  Wilkes named “our” Point No Point after another Point No Point on the Hudson River. (That original point is also called Dietrick’s Hook). Wilkes gave the point its name because it appears much less of a promontory at close range than it does from a distance.

A lighthouse was constructed in 1879.  In 1975 the USCG added a radar tower on the site as part of the Vessel Traffic Service (VTS).  The VTS is basically like an air traffic control system, but instead of watching planes in the air, it monitors ships on the narrow waterways of Puget Sound. 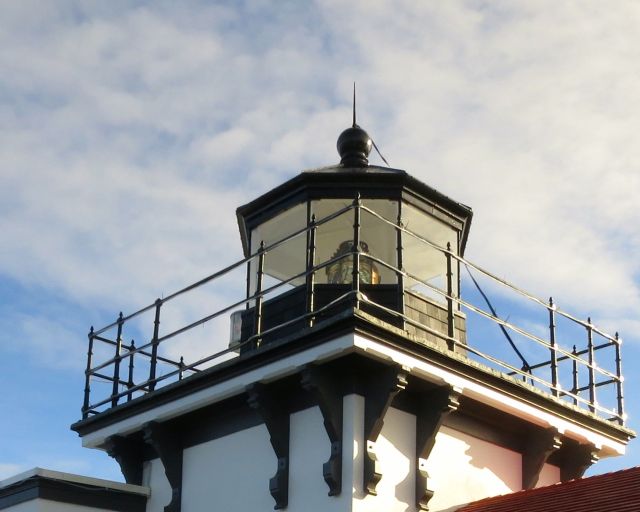 The fifth-order Fresnel lens was cut in France and shipped around the southern tip of the Americas in 1880.  The lighthouse was struck by lighting in 1931 forcing the replacement of a cracked prism.  In spite of all that history, the the grounds and buildings are in remarkably good shape.  A testament to the Lighthouse Association that is dedicated to the maintenance of the site.

With the automation of almost all of the Washington lighthouses the USCG leased the property to the Kitsap County Parks and Recreation Dept. in 1997.

So, keeping a daily watch on the weather maps, I patiently waited for a break in the December gloom.  As it turned out my weather window presented itself on Christmas eve.  Partly cloudy (which I always interpret as partly sunny) and 10 knot winds from the SW, with temperatures in the low 40’s – that was the forecast.  Do-able… I loaded up the bike and headed for the Edmonds ferry terminal, driving through a biblical thunderstorm along the way.  Yikes!

I parked along the Edmonds waterfront, hoping for some Christmas cheer from the city parking enforcement officers.  My 4 hours time zone limit was sure to come and go before I would return.  I rolled onto the deck of the M/V Puyallup, for the 1030 sailing and lashed my trusty Rockhopper to the bulkhead.

Aboard the M/V Puyallup

I was relieved to see some partial clearing as our vessel approached the Kitsap Peninsula at the Port of Kingston. Of course everybody in my family calls this place “Bubba Town” after one of my little grandsons, Kingston (AKA Bubba) referred to it as such during one of our adventures.

The WSF deck crew always sends bicycles off the ship first with a little bit of a head start on the vehicles, but since every ferry terminal in the state involves an uphill climb from the water, I always find it much more peaceful to sprint off the boat and then pull off someplace out of the way and wait for the hoards of traffic to zoom past. 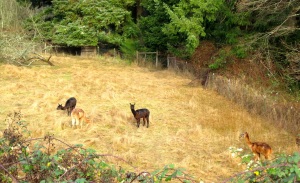 On this day I pulled off next to a field of alpacas, or were they llamas?  Whatever they were, they were very interested in this strange guy astride a two-wheeled animal watching them from the roadside.

I was hoping that the traffic would thin out a few miles up the road when I made the turn to head north on the Hansville Road, but no such luck.  Man there was an angry bunch of drivers out there.  Hello… It’s Christmas eve people… Peace on earth… Good will towards cyclist. Remember?

Thankfully as I neared the north end of the peninsula the traffic disappeared and I found myself rolling down the Point No Point Road.  I had to stop and examine a very cool “house” along the PNP road.  The M/V Jupiter Inlet was someone’s residence made from the deck structure of a WWII ocean going tug.  Originally a 185 foot military seagoing vessel, it now sat as a museum piece and a home to the curator a few hundred meters from the light station.

I thought of the heating bills to keep this place warm in the winter and a cold chill raced up my back.  Pedaling back into the sunshine brought a little welcome relief.  I hiked around the lighthouse grounds and enjoyed a few moments of bright brilliant sun and blue sky.  My timing was perfect for photographs and for finding a little shelter from the breeze to take a break. 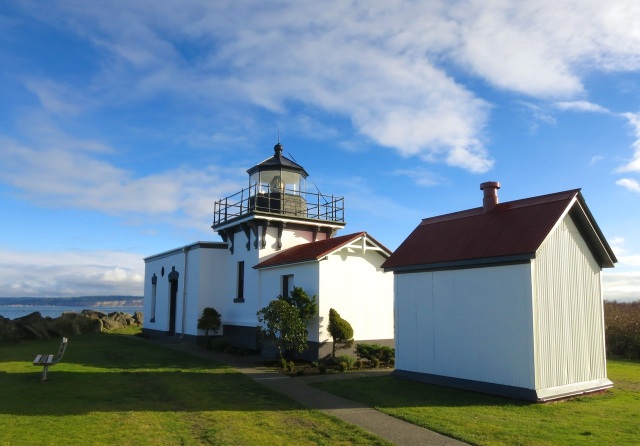 I hiked along the beach and recalled that this was the first time I had ever been to this lighthouse via the road.  All my previous visits had been in my kayak.

In fact the only other time I had been up in the Hansville area was about 30 years ago.  I was on my bicycle then as well, racing as part of a multi-sport race team.  A kayak leg across Puget Sound, a cycling leg up to the northern tip of the Kitsap Peninsula and back through the Port Gamble Indian Reservation, and then a running leg down toward the Port Madison Indian Reservation and, eventually, back to Bubba Town.

What I remember most about that race were the really steep hill climbs,  and the roads through the Res’ were loose gravel. A challenging combination. But I digress…

Soon enough it was time to mount up and ride.  The clouds were creeping in and I still had lots of miles to cover before I  completed the loop.  By this time there was NO chance I’d be back before my 4 hour parking limit was long gone.  I already decided that a parking ticket was a small price to pay for such a wonderful day of adventure and exploration.

When I did get over the to S’Klallam – Port Gamble Indian Reservation I was welcomed with paved roads, and at one point, a really nice paved bicycle path paralleling the roadway for a few miles.  Very Copenhagen-ized.  Sadly the hills didn’t get any less severe.  Hello granny-ring, thanks for being there.

I pulled over to the smell the roses and explore a S’Klallam tribal cemetery tucked back in the forest.  The site was watched over by a huge S’Klallam totem and an informative plaque describing the historical events represented in the figures on the totem.  Instead of giving you the complete rundown I’ll leave this for you to explore on your own some day. Suffice to say, it is well worth the trip… Oh, and let me add… the S’ is silent in S’Klallam.  Think (pronounce) Clallam, like Clallam Bay.

About this time my empty, grumbling tummy was telling me to get back in the saddle and get rolling toward some food.  I pounded out the rest of the hills back to Hwy. 104 and coasted into Bubba Town for a gourmet burger and fries at the Grub Hut restaurant.  Just what the hungry cyclist needed, and just in the nick of time.

With my usual total disregard for the sailing schedule of the Washington State Ferries I wasn’t surprised to see the boat casting off all lines as I rolled down to the dock.  No worries, I tucked in behind a glass paneled wall to escape the chill, and finished my French fries while I waited 40 minutes for the M/V Spokane.

Resting at Point No Point

I was delighted to see my van, parked right where I had left it, and not a single parking infraction anywhere to be seen.

Sweet!  Merry Christmas to me from the City of Edmonds.

Thanks for riding along with me.  If you made it this far here is a little video of the trip.  Enjoy.

Thanks for riding along, Kat

3 Responses to Point No Point