Well, it was 36 degrees and trying to snow… Must be time for a bicycle ride.  I was on my way to the Seattle Bike Expo, held each year on Pier 91 at Smith Cove.  But like all fun adventures this ride was as much about the journey as it was the destination.  Kayaks, and fishing boats, and trains, all caught my attention along the way.

Lets have a look at some photos.

First stop was dropping the new sit-on-top double kayak off at the Dudes’ house.  Of course they were ready to launch right off their lawn into the street, but that trip will have to wait for a couple of weeks.

I carried on to Gas Works Park and launched my Rockhopper from there, following a series of backroads and bike trails to Smith Cove.

A few sprinkles and a chilly wind was about the extent of the challenges presented on the ride in.

I pulled into Seattle’s Fisherman’s Terminal to poke around the docks and have some lunch.  The commercial boats were a beehive of activity, getting outfitted for the season.

Then I went from boats to trains as I cut off the Ship Canal Trail and headed along the BNSF rail yards. 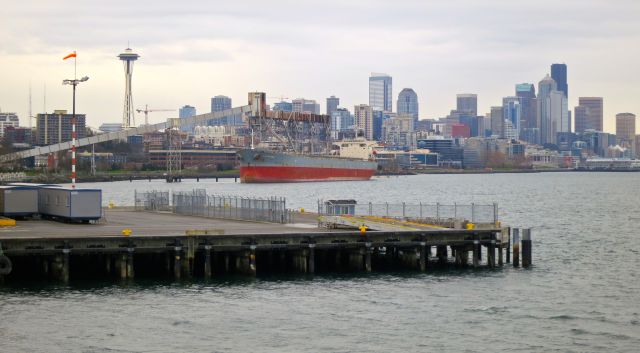 This year I was at Bike Expo for one specific attraction… I was there to watch a presentation by a guy named Joe Kurmaskie, “The Metal Cowboy”.  Joe is a writer, and a bicycle traveler, and a marvelous story teller.  I have been reading of his travels for… Yikes, I just did the math on that… Decades!!!

I arrived early enough to wonder around and explore all the cool stuff.  Of course the “classic bicycle” displays are always fun.  Its a little disconcerting to see bikes that I remember fondly from my early days as a cyclist being referred to as “classic” or “retro” but I guess time and tide wait for no man. 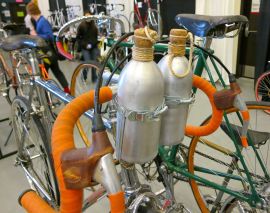 The next BIG thing

I had a chance to meet Joe before the show and visit for a while.  We talked for quite a while about bicycle journeys with little travelers – his, and mine.  I was delighted to learn that he is the exact same whacky guy in person that he appears to be in his stories.

Any parents out there looking for a fun book to read with their children, Joe’s Mud, Sweat and Gears would be an excellent choice.  But beware, your six or seven year old may start stuffing clothes in a rucksack and head out the door for unknown places yet to be discovered. 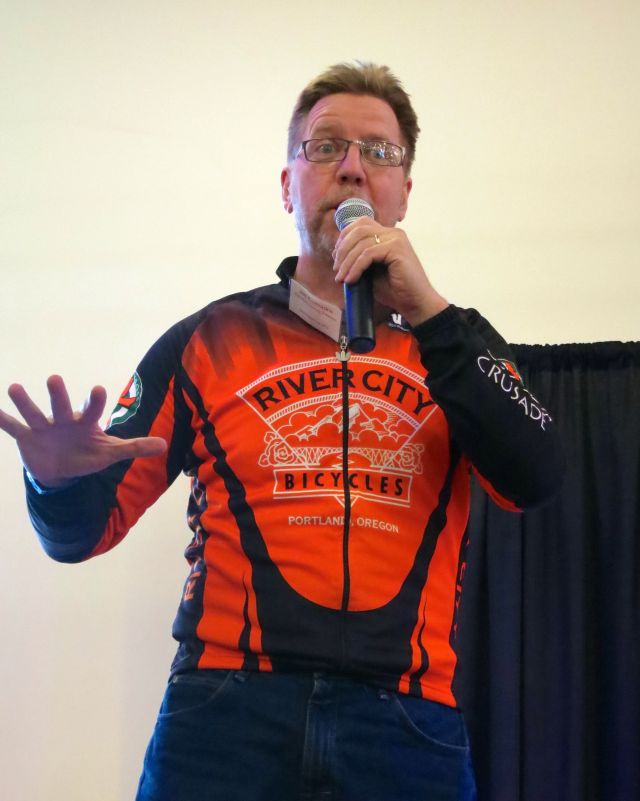 Joe announced that his new book, A Guide To Falling Down In Public, has been picked up by some award winning Hollywood big shots and is going to become a TV series.  How cool is that?

The irony of a guy that doesn’t own a TV being swept up in that world was not lost on Joe, but as he stated in his presentation, anything that gets the lowly cyclist more noticed by the general car driving public has to be a good thing.

Its A Seattle Thing – 3 babies in a trailer.

Kat and the Metal Cowboy

Well that’s about it for this edition of the Adventure Journal.  All that remained was a really chilly (and slightly wet) ride home.

Oh, but wait.  I didn’t mention how Joe got the name “Metal Cowboy”.  Well, I guess you’re just gonna have to read the book to find that out.  Enjoy