Just 60 short miles from my back door.  That’s where I was as I stepped into the wilderness today.  A little over an hour on the motorbike, and about 1/2 mile of hiking trail had me immersed in the Alpine Lakes Wilderness Area, headed up to Trout Lake.

There are actually several access points to designated wilderness areas much closer to my door, Boulder River Wilderness Area is probably more like 30 miles away. It feels a lot closer because I’m looking at it as I type this story.

But today the plan was to hike up to Trout Lake.  I strapped my trekking poles to the Strike Force Moto and headed for the hills.

I think my first hike to this picturesque little mountain jewel was back in about 1970.  Since then I’ve returned many times.  It has been interesting to see the way mother nature has rearranged the river valley over the years.  Back in 2006 a massive flood wiped out the trail and smashed the sketchy log bridge that crossed the Foss River.  Some adventurous souls (Travis and me among them) found a route across the river in 2007 by “poodle scooching” along a fallen tree.  Today I’m pleased to report that the trail was in great shape and there is a new bridge.

I had a bunch of red-brested sapsuckers buzzing around my lunch spot at the north end of the lake.  I initially thought they were yellow-bellied sapsuckers… but after further checking I realized my error.  But not before I titled them incorrectly in this cool little movie. 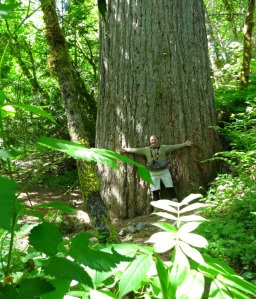 One of these guys…

Till next time.  Kat